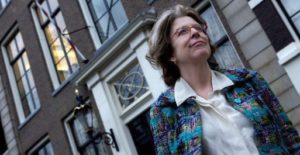 This week the City of Amsterdam and the government of the Netherlands are celebrating the fact that they won the bid for the European Medicine Agency, the EMA, which had to be relocated as a consequence of Brexit. But what is less known, is that it is 15 years since GRI came to Amsterdam, the Netherlands.

In 2002 The Dutch Financial Times (FD) wrote that the Dutch Capital won GRI after a fierce competition with other European cities such as Stockholm, Kopenhagen, Zürich and the Hague. (Financieel Dagblad: “Hoofdstad strikt begeerde GRI na zware lobby” http://www.duurzaamheidsverslag.nl/titel-226/ ) At the time I was director climate change and private sector at the Dutch Government in The Hague.

Private sector accountability and reporting on the issue of sustainability was a completely new and unknown thing. As members of the governing council of UNEP, the UN Environment Program, we were impressed with what we heard from Klaus Töpfer and Jacqueline Aloisi de Larderel, then Executive Director and private sector Director of UNEP, who both strongly engaged themselves to support the global launch of GRI, which had been founded in Boston by Bob Massie and Allen White, as a special project under Ceres.

At the time I represented the Dutch Government in the negotiations, with a campaign which focused on the reputation of the Netherlands as an open economy, with a focus on human rights and environment, while also being the second largest host of international organizations in the world (mostly UN organizations and international courts).

The move from Boston, as an upstart NGO, into an Amsterdam based independent international organization was celebrated at the UN Sustainable Development Summit in Johannesburg, in September 2002, ten years after the 1992 Rio Environment Summit. It was the first international appearance of the newly appointed Prime Minister Jan Peter Balkenende, and many business and civil society leaders attended, as well as Crown Prince Willem Alexander and Princess Maxima.

I attended, while being seconded in Johannesburg to UN Secretary Generals Kofi Annan’s team; where I was put in charge of the so-called Type 2 agenda; the UN Private Sector Partnerships. Sustainability reporting fitted well in with the public-private agenda, and GRI received a formal recognition in the UN end-text, thanks to the lobbying of GRI’s Paul Hohnen. The initial strength of GRI in Amsterdam was the support from the City and Mayor Job Cohen, as well as from business and financial community and the two universities of Amsterdam. In no time most of the Amsterdam based multinationals had turned into annual GRI reporters, and become active members of the Organizational Stakeholder program.

In addition, Greenpeace, Amnesty, Oxfam and the large Trade Union FNV gave their support through their international offices. I was so fascinated by GRI, that I asked my Minister van Geel to be seconded to GRI, and start my long journey with GRI in the beautiful historic monument on the Keizersgracht in Amsterdam. The first three persons I met at GRI were Piet Sprengers, Executive Director of VBDO, the organization of sustainable investors , Folkert van der Molen, of DHV Environment, who both were actively supporting and profiling GRI, amongst other through an annual GRI seminar; and Karien van Gennip, then Minister of Trade, who strongly promoted corporate transparency and reporting, and who secured financial support for GRI.

In those fifteen years, GRI has grown larger than we ever dreamed it would do. It now has almost eighty member of its governance bodies, and almost one hundred staff members, spread out over the secretariat and the eleven small regional and local offices in 11 locations outside Europe. Over those fifteen years, GRI has played a really big role in bringing sustainability reporting and measuring impact on sustainable development to the center of the global and sustainable development agenda. It has been a major driver of corporate action, transparency and accountability. Today, thousands of companies are reporting, and there are more than 100 national policy instruments and regulations in more than 50 countries that refer to GRI. In engaging with policy makers, GRI was pivotal in raising awareness about the importance of sustainability reporting policy, especially at national and regional local. And this is where policy has the power to be a driver for more reporting, and ultimately improve the lives of people.