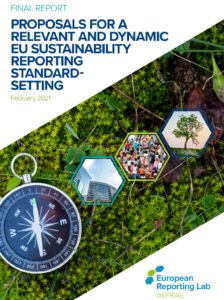 The report of the multistakeholder Project Task Force on preparatory work for the elaboration of possible EU non-financial reporting standards established by EFRAG (the ‘Task Force’), was submitted after five months of very intensive work, proposing a roadmap for the development of a comprehensive set of EU sustainability reporting standards. The Chair of the Task Force, Patrick de Cambourg, President of the French accounting standard setter (Autorité des normes comptables), commented: ‘This report is the outcome of the collective and intensive work of the Task Force which has required constant dedication and commitment from its members, representatives and seconded support staff. The Task Force also carefully considered input from global initiatives, as well as the feedback received from outreach events organised by EFRAG across the EU with a large number of panelists and unprecedented participation from all EU horizons. The detailed report taken as a whole reflects a large consensus. The proposals in the report do not constitute a first attempt at standard-setting, but rather describe the scope and structure of future sustainability reporting standards that contribute to the achievement of the EU’s policy objectives. Meeting the technical challenges of EU sustainability reporting standard-setting also has implications in terms of governance and resources which are not in the Task Force’s remit, but which are critical success-factors, addressed in the report of Jean-Paul Gauzès.’