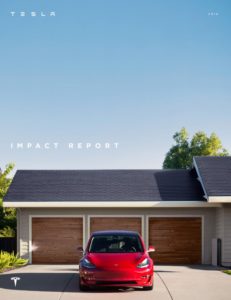 Tesla published its first-ever Impact Report on Monday, which measures and quantifies the effects of the company’s products and operations on the environment and its communities. Based on the results of the report, Tesla’s products are not the only ones that are making an impact; the company’s operations and culture are helping the push towards sustainability as well.

Among the highlights of the Tesla-produced report: The company said it has sold more than 550,000 vehicles to date, and in which have driven more than 10 billion miles. Tesla said those all-electric cars are responsible for more than 4 million metric tons of carbon dioxide not being released into the atmosphere. The company based its figures on what it said was the equivalent of 500,000 internal combustion engines getting 22 miles-per-gallon of gas.

Tesla’s reported that the growth of its Supercharger network, which includes nearly 13,000 individual Superchargers around the world, has delivered 595 gigawatt hours worth of energy to power Tesla vehicles since the first Supercharger station was set up in 2012. Tesla said the amount of energy delivered from its Superchargers is equal to the burning of 75 million gallons of gas in traditional engine vehicles.

“Sustainability is at the heart of everything we do,” Tesla said in the report. “As we continue to ramp production of Tesla products, we are committed to making significant progress towards our goal of operating global Tesla manufacturing, vehicle charging and other operations using 100 percent renewable energy.”

Tesla also detailed what its said was the success of its power-generating efforts from its various solar installations. The company said that as its Model S, Model X and Model 3 cars so far have consumed 5.36 terawatts of energy, Tesla also has generated 13.25 terawatts of solar power via its solar technology products.