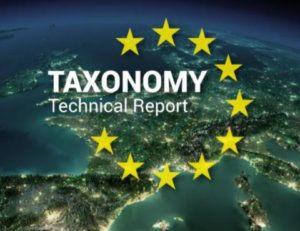 The EU Green Deal, climate neutrality, sustainable economic growth, and inclusion of all countries, a classification system for sustainable activities fulfils a key role, i.e. an EU Taxonomy. In March this year, the Technical Expert Group (TEG) on Sustainable Finance published its final report containing recommendations on the EU Taxonomy, including an overarching design as well as extensive technical screening criteria. Sustainalize organized three webinars about this EU Taxonomy, clarifying the possible implications and timeline for governments, companies and financial institutions in consultation with experts.

Although the corona crisis focus is on providing care and keeping our economy running, there is also a realization that the world is changing rapidly; The world is not only facing major transformations in the economic and geopolitical field, but environmental and social issues also require a change in thinking, acting and making our current systems fit-for-the future.

The EU Taxonomy is an important guideline in this context, and the introduction is fast approaching. The first delegated acts will be published end of the end, obliging governments, companies and financial institutions, resulting in significant impacts. The great interest in the series of webinars organized by Sustainalize at the end of May showed that many companies are uncertain about the content and implications and that there is a great need for information. In short, we can outline the most important steps.

During the three webinars, we discussed the ins and outs with members of the TEG. During these conversations it was not denied that reality will be tough; however, the difficulty does not lie in the EU Taxonomy, which is built around a logical structure, but mainly in the translation into practice. An early start and sharing of experiences are essential to mitigate risks. Examples of this are already available, such as from the French company SPIE.

Read the full article and view the webinars!