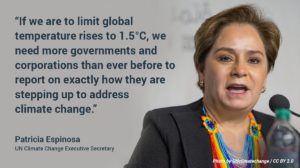 “If we are to keep the target of limiting global temperature rises to 1.5 degrees Celsius within our grasp, we need more governments and corporations than ever before to report on exactly how they are stepping up to address climate change,” said UN Climate Change Executive Secretary and Summit Co-Chair Patricia Espinosa.

“It is only with resource to such information that the world can begin to understand how it can meet the urgent task of implementing the Paris Agreement. Today’s challenge from Governor Brown – which aims to stimulate greater levels of disclosure – is therefore a much welcome ‘call to action’ ahead of the Summit, ahead of COP 24 in Poland,” Espinosa added.

“We can’t manage what we don’t measure, and disclosure is a crucial step for that,” said Mahindra Group CEO and Summit Co-Chair Anand Mahindra. “I echo the challenge to companies and governments to enhance disclosures from Summer 2018. The time to step up and act is now.”

Transparently tracking and monitoring greenhouse gases is a key component of holding governments and businesses accountable for meeting emissions reduction targets. The challenge issued today sets a goal of having at least 300 more companies, cities, states and regions publicly disclose their carbon emissions and reduction efforts by the Global Climate Action Summit this September.

More than 570 cities with a combined population of 608 million people, 100 states and regions across 88 countries and 6,300 companies with 55 percent of global market capitalization have already taken urgent action by measuring and reporting their climate impact through CDP, formerly known as the Carbon Disclosure Project.

The challenge issued today also calls for universal and standardized reporting by all governments and entities worldwide by 2030 as a clear and achievable goal.

“Disclosure works,” said Lance Pierce, President of CDP North America. “Companies, cities, states and regions who have disclosed via CDP for many years – and even those new to the process – are reaping great benefits from public disclosure, and the world is rewarded with collective data, insights and knowledge. They are forging ahead with climate action because it is both in their and their stakeholders’ best interests to do so. I hope that many more are inspired to embrace today’s universal disclosure challenge in time for the Global Climate Action Summit,” he added.

As a member of the Under2 Coalition, California discloses its mitigation and climate goals to CDP alongside more than 100 state and regional governments, a 150% increase in just two years. Together these governments represent 18% of the global economy and 658 million citizens. The disclosures are displayed in CDP’s States and Regions online climate tracker.

Businesses and governments are stepping up their climate efforts head of this year’s Global Climate Action Summit on September 12-14 in San Francisco.

The finance sector has been activate by a worldwide challenge to major investors to accelerate and scale up climate actions including Investment, Corporate Engagement, Disclosure and Policy Advocacy and a Green Bond Pledge.

A key purpose of the Summit is to showcase climate action around the world, along with bold new commitments, to give worldwide leaders the confidence they need to go even further by 2020, starting from when they meet at the United Nations COP24 in Poland in November and through to a climate leaders’ Summit scheduled by the UN Secretary-General in late 2019.

Worldwide emissions must start trending down by 2020 in order to keep a global temperature rise well below 2 degrees C and avoid dangerous, rising risks to people and economies world-wide: the Summit will play a key role in galvanizing the support necessary to make that happen. Disclosure is fundamental to tracking individual and collective progress towards global climate goals.

The Summit marks the first time a U.S. state has hosted an international climate change conference with the direct goal of supporting the Paris Agreement. For more information on the Global Climate Action Summit, visit: globalclimatectionsummit.org.