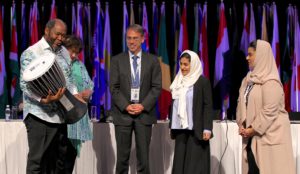 The inaugural United Nations World Data Forum is concluding today with the launch of a global plan for better data to improve people’s lives, and new ideas and solutions to boost the collaboration, resources and policies needed to put it into action.

The Cape Town Global Action Plan for Sustainable Development Data, which will be adopted by countries at the UN Statistical Commission when it meets in March of this year, was prepared with inputs from the global statistical community and data experts from a wider range of stakeholders.

“The UN World Data Forum is the perfect place to launch the Action Plan and get all the major players behind it,” said UN Under-Secretary-General Wu Hongbo at a press conference.  “To implement the transformative 2030 Agenda for Sustainable Development and build a better future for people everywhere, it is essential to have accurate, reliable, timely and disaggregated data.”

The Plan, which sets out a global vision and  “to do” list for better data, calls for a commitment by governments, policy leaders and the international community to undertake key actions in six strategic areas, including: innovation and modernization of national statistical systems; dissemination of data on sustainable development; building partnerships; and mobilizing resources.

Currently there are large data gaps that hinder policy makers from making informed decisions. Over 100 countries do not keep accurate birth and death records, and only 41 per cent of countries regularly produce data on violence against women.  The unprecedented scope of the UN’s 2030 Agenda, with its 17 Sustainable Development Goals, has magnified the challenge to track progress and inform policies. “We cannot achieve what we cannot measure,” said Pali Lehohla, South Africa’s Statistician-General and head of Statistics South Africa.

Over 1,400 data experts from more than 100 countries have been holding discussions, data labs and interactive presentations at the Forum from 15-18 January, with participants from governments, national statistical offices, the private sector and academia, international organizations and civil society groups.  The Forum was hosted by the South African government and Statistics South Africa in partnership with the UN Department of Economic and Social Affairs (DESA).

The Global Action Plan calls for policy leaders to achieve a global pact that recognizes that data are essential to the full implementation of Agenda 2030, that statistical systems need to be strengthened and better funded and that data producers – from civil society to private sector and academia – need to work together to fully address the needs of the sustainable development agenda. How to strengthen statistical systems was the subject of extensive discussion at the Forum, and a number of commitments were advanced or reaffirmed.

The African Development Bank committed to present a proposal to its Board to sustain and even scale up, over the next 3 years, its support for statistical development work across Africa.  The World Bank added its voice of commitment to support 78 IDA countries to implement a multi-topic household survey every three years, as well as support capacity for gender statistics, among other areas. Norway reaffirmed its commitment to supporting statistics and data by providing partners with high-quality technical skills and expertise.

In addition to urging the strengthening of existing statistical mechanisms, the Global Action Plan calls for the application of new technologies and new data sources into mainstream statistical activities, and integration of geospatial data. It also calls for data on all groups of the population to be expanded so that no one is left behind, a key principle of the 2030 Agenda.

A number of innovative data initiatives and tools were announced at the Forum, including the following.  The United Kingdom Department for International Development (DFID) launched a Data Disaggregation Action Plan, to better measure vulnerable groups and ensure that everyone is counted and everyone counts. UN Global Pulse launched a new tool, hazegazer.org, that can improve crisis management. Telefonica and CEPEI  (Centro de Pensamiento independiente) launched datarepublica.org, a digital platform to connect citizens and development actors in Latin America with data for the SDGs. In addition, the International Roadmap on Open Data, which summarizes the proceedings of the International Open Data Conference 2016 and includes an action plan, was launched.

It was announced today that the United Arab Emirates will host the next UN World Data Forum in Dubai, in late 2018 or early 2019.  The announcement was made at a press conference today by Dr. Gabriella Vukovich, co-chair of the High-level Group for Partnership, Coordination and Capacity-Building for Statistics for the 2030 Agenda for Sustainable Development.

“We are looking forward to working with the colleagues from the United Arab Emirates to organize together an open and inclusive 2nd World Data Forum,” said Stefan Schweinfest, Director of the UN Statistics Division. “This will be a unique opportunity to strengthen data and statistical systems for development not only at the national, but also at the regional and global level.”

The Forum was agreed by the UN Statistical Commission based on a recommendation by the UN Secretary-General’s Independent Expert and Advisory Group on a Data Revolution for Sustainable Development.  Improved use of data and statistics will be crucial to achieving the transformational vision of a better future for people and the planet, set out in the 2030 Agenda agreed by world leaders at the UN in September 2015. Rapid expansion in new sources of data is creating large-scale opportunities for innovative solutions, which need to be integrated with strengthened official data mechanisms and structures.