Governance & Accountability Institute (G&A) announces the results of its inaugural study on the 2018 sustainability reporting trends of the companies in the Russell 1000 Index®.  This research expands G&A’s annual studies, conducted for the last eight years, of the S&P 500® companies to include the next 500 largest companies in the US Capital Markets. G&A Institute’s research team determined that sixty percent (60%) of the companies included in the Russell 1000® published sustainability reports in the year 2018.

It’s important to note that the S&P 500® Index and Russel 1000® Index overlap, as they are market capitalization weighted indices that contain roughly the largest 500 and 1000 companies in the US capital respectively.  This means that the largest half of the Russell 1000® generally mimics the S&P 500®.

Therefore, we believe that it’s also important to now look at the second half of the Russel 1000® independently and to track the growth of reporting in this subset of companies.   When examining these two subsets (largest half vs smallest half of the Russell 1000®), G&A researchers found that:

This indicates that the larger publicly-traded companies in the S&P 500® continue to set the pace for corporate sustainability / responsibility / citizenship and related reports by U.S. companies.

COMMENTS
Louis Coppola, EVP & Co-Founder of G&A Institute, who designs and manages the corporate reporting research and analysis, explains: “While it has become common knowledge through studies such as our S&P 500 research that the majority of large-cap companies are publishing sustainability reports, the prevalence of reporting by smaller companies has been lagging.

“Due to numerous pressure points from investors and other important stakeholders building up over the last few years, we anticipate that this group of smaller companies is reaching a tipping point in terms of beginning their reporting on sustainability matters.  We designed this inaugural research project to keep our finger on the pulse of this trend and we look forward to sharing the results in the years to come.

“This inaugural research project will be continued each year by G&A Institute’s research team to track the reporting practices of this expanded group of companies.”

Hank Boerner, Chairman & Co-Founder of the Institute, observes: “Over the past five years we have seen a dramatic increase in the disclosure and structured reporting of large-cap US companies, especially as represented in the S&P 500 Index.  These market leaders are responding to increased adoption of sustainable investing strategies and practices by asset owners and their internal and external asset managers — especially fiduciaries such as public employee pension funds, mutual fund and ETF managers.

“Also, large-cap companies are being asked questions by their B-to-B customers — especially those companies with prominent brands in the consumer and business marketplaces. Internally, the employee base (the company’s human assets), are expecting and in some cases demanding action on sustainability issues such as climate change and diversity issues.

“The larger companies are devoting substantial resources to enhance their sustainability journeys and to robustly report on their progress.  We expect to see this trend continue to move through the publicly-traded company universe, as well as for privately-owned companies.  This first report on the total universe of Russell-1000 Index companies is part of our ongoing monitoring of corporate sustainability reporting in the United States and in other countries.

“The results of our annual S&P 500 Index tracking of corporate reporting and now the first total Russell 1000 analysis are clear signals that important stakeholders, and especially providers of capital, expect that publicly-traded companies will be launched on their sustainability journey and telling the story of their progress on a regular basis.”

NON-REPORTERS AMONG THE BOTTOM HALF OF THE RUSSELL 1000®

The chart below presents the number of companies in the bottom half (by market cap) of the Russell 1000 from each GICS* sector that do not publicly report on their sustainability opportunities, risks, strategies, actions, programs and achievements — implying no visible organized focus on corporate sustainability and ESG performance.  Some of these companies may not be yet launched on their sustainability journey and so have little to report to their investors and stakeholders. 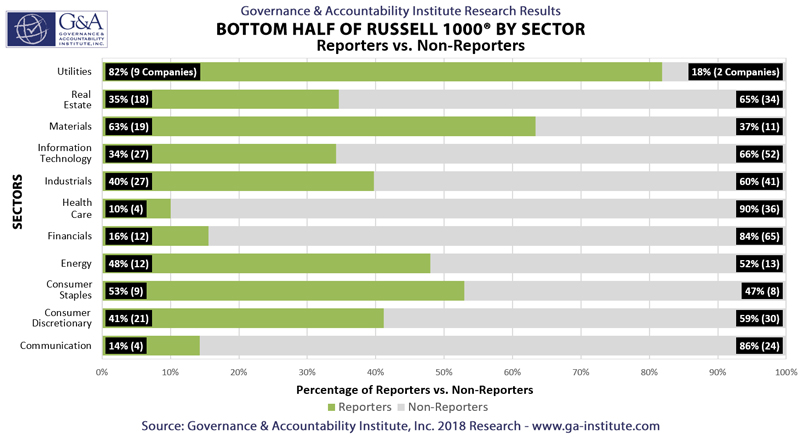