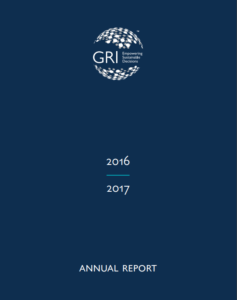 ​1. Collaboration is crucial – gather a team
So we had defined what we needed to look at but, to collect the feedback, we needed to know who would be up to the task. So for the current reporting cycle, GRI assembled a cross-functional project team from all different areas of the organization, who looked at who our stakeholders are, how GRI interacted with these groups throughout the reporting period, and what topics these stakeholders considered important. Based on this, the team identified the trends and topics that mattered the most to the stakeholders.

2. Feedback from the external assurance provider – know your stakeholders
The sustainability report that we published for 2014-2015 underwent an external assurance process. One of the most important feedback points that we received was that we should be more explicit about how we engage with our stakeholders. Not only that, but we should also ensure that we made engagement a part of our day-to-day business practice and that we got used to recording the interactions and the feedback that we received throughout the year, as part of our business process and not only for the reporting.

The first question this feedback raised was, of course, who are our stakeholders? The principle of stakeholder inclusiveness established in GRI 101 helped us define this, to include individuals and entities that can be affected by the work and services that GRI provides or who influence our ability to achieve our objectives or do our work. The feedback and input that these stakeholders provide is crucial for GRI to identify its impacts and the main topics it needs to address and report on, in other words, to carry out the materiality assessment.

3. Feedback from the stakeholder groups – know your impact
Once all stakeholders were identified, it was up to the Reporting Team to ensure that all voices from our well-established network of stakeholders would be represented in the assessment of which material disclosures were most relevant. This list was then revised by GRI’s Stakeholder Council, which contributed to this process of ensuring representation.

4. Mapping time
The Reporting Team mapped the themes raised to reflect the prioritization that the SC and the stakeholders themselves had indicated. The list of topics was ranked according to importance, based on how often an issue was raised by stakeholders, but also by how important the issue is to GRI and how much impact it has on the world. The Reporting Team also translated these trends and themes into a list of material topics that represent the impacts that GRI has on the economy, environment and society, grouping them under different categories.

5. When did finance become irrelevant?
It became clear to the Reporting Team that the material topics were of two different types: those topics related to GRI’s operations, and those related to the effectiveness of GRI’s mission and work.
The team then faced a dilemma: how to report on the operational impacts of the organization, such as our financial health and the human resources that facilitate GRI’s work, when it was unclear they met the reporting threshold when compared to issues of mission effectiveness. Realizing that these two groups of topics are interdependent and relevant to sustainability reporting, a decision was made to separate the two categories of material topics. In that way, the impact of GRI on its internal stakeholders, its staff, and the external stakeholders who are part of its network and scope of operations would be accounted for.

6. Consensus reached
After this process, and with input from GRI’s management team and members of the different governance bodies, it was time for the team to settle on its material topics.

Are you curious to know which ones made the list? And would you like to know more about the process? Read GRI’s 2016-2017 Annual Report to find out more.