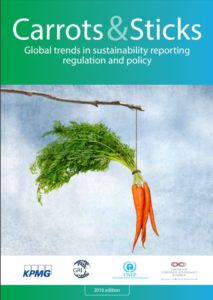 Today the new trend report about Sustainability Reporting Instruments has been published. Last year, 2015, was a milestone for sustainability with crucial and unprecedented agreements by the international community, including the Sustainable Development Goals (SDGs) and the Paris Agreement on climate change action. The year 2016 now calls for translating these achievements into action to achieve the 2030 Agenda for Sustainable Development. It also marks the tenth anniversary since the first Carrots & Sticks report was published in 2006. (The second report was published in 20104 and the third in 2013).

• Mandatory instruments dominate but growth in voluntary instruments is also strong. Around two thirds of the instruments we identified are mandatory and around one third voluntary. Around one in ten instruments adopts a ‘comply or explain’ approach • The level of activity of stock exchanges and financial market regulators is noteworthy in the 2016 edition of this report, with these two groups together responsible for almost one third of all sustainability reporting instruments identified

• Almost one third of reporting instruments apply exclusively to large listed companies and of these around three quarters have been introduced by financial market regulators and stock exchanges. The remaining two thirds apply either to all companies or to other types of companies such as state-owned