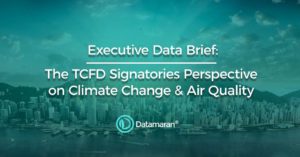 Financial Services are lagging behind all other industries when it comes to climate change disclosure according to a new data brief released by Datamaran. Datamaran is the global leader in Software as a Service (SaaS) solutions for non-financial risk management.

Primarily dominated by financial services, there are over 200 of The Task Force on Climate-Related Financial Disclosure (TCFD) signatories across all sectors, which account for $44 billion in average market capitalization. Coupled with the fact that financial services are one of the biggest sectors in terms of market capitalization, approximately $17 trillion, their potential impact on climate change can be far reaching.

Dr Donato Calace, Director of Innovation at Datamaran commented: “It is not surprising that climate change is not seen as a material topic in the financial services sector itself, however they have the power to influence the market through impact investments, green bonds, and loans. The time is ripe for financial services to take the lead as there are signs that show the tide is changing, such as, the EU action plan or the TCFD recommendations.”

Three years after the TCFD recommendations were released, the gap between the sectors on high emphasis reporting has been reduced, moving from 31% in 2016 to 15% in 2018.

Further details of the research could be found in Datamaran’s data brief available here (pdf).