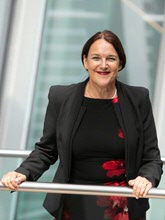 Since earlier this year, Nancy Kamp-Roelands is, by special appointment, Professor of Non-Financial Information, Integrated Reporting & Assurance. She sees this appointment as a bold, well-timed step on the part of FEB. “Although integrated reporting and non-financial information appears on agendas all over the world, there are still very few professors in this area. Groningen truly deserves a compliment for instituting this chair.”

A quick glance at Kamp-Roeland’s impressive CV reveals it instantly: she has a heart for sustainability. Surprisingly, it was the purchase of a new house in Rijsbergen in the late 1980s that would signal the beginning of her career, leading her along a path of prominent international positions. “That house was located in a street where the land had been severely contaminated due to a chemical pesticide factory. The individual from whom we bought the house later appeared to be one of the activists who had been protesting against that company. I was a certified public accountant, and I thought, ‘How could this simply happen? Why haven’t I seen anything about it in the annual reporting of that company?’ Eventually this had imposed an extremely high toll on a neighborhood and, ultimately, the entire Province of North Brabant. That scandal led me to specialize in sustainability reporting.”

Kamp-Roelands completed her doctorate in Tilburg, where she became involved in the development of the first reporting guidelines in the area of sustainability. “I always proceeded from the notion that such reporting is in need of a? far-reaching change: not just for one company, but for everyone. This discipline was non-existent at that time. For that reason, I quickly became one of the experts. I eventually came to chair the United Nations committee that developed the global corporate responsibility indicators. For years, I was able to proclaim the importance of these indicators at UN meetings attended by more than 300 people from all parts of the globe. Our paper is currently integrated in the UN document that is used for reporting on the Sustainable Development Goals. Our work is having a major impact, and that’s really nice to notice.”

Persistent and growing pressure for transparency is increasingly leading businesses to address their international chain management and corporate social responsibility (CSR) in their annual reports. Kamp-Roelands notes that this allows directors to provide greater insight into their companies and to make decisions that are better informed. “I am strongly convinced that reporting contributes to better decision-making. Accountants play a major role in improving the transparency and quality of reporting. In practice, I observe that transparency and reporting improve thinking about the actual business activities, as well as about the company’s strategy and the objectives to be pursued.”

A view of the entire value chain

Kamp-Roelands stresses that, in this respect, her discipline extends far beyond sustainability reporting alone. “Where can we create value for multiple stakeholders in the long term? This is the central question. In Integrated Reporting, we consider both the financial and non-financial impact of a company. For example, it could concern employment, diversity, safety, human rights, the re-use of materials or the consequences of pollution for the rest of society. How can a food producer achieve healthier nutrition? How can a company ensure that its suppliers respect human rights?”

Kamp-Roelands argues that more and better insight into the non-financial aspects of business operations provides an important foundation for action. “Increasing attention to the registration and measurement of CO2 impact across the entire value chain is a good example. Philips for example first conducted research in which product groups the largest CO2 was caused, and next a highly precise analysis of the location at which the respective hair dryers that they bring to the market cause the most emissions. The results of their analysis revealed that this product has by far the greatest impact in the phase in which it is used by consumers. The greatest impact is thus not due to the suppliers, the production process or the processing of the residual product at the end of the life cycle. This is extremely valuable information, because it allows a company to know exactly where its efforts to reduce CO2 emissions could have the greatest effect.”

In this way, increasing numbers of companies are examining the entire life cycle of their products, thereby learning where measures could best be applied. This often occurs at the company’s own initiative, due to the forethought of the directors. “Further tightening of regulations will be unavoidable in the future. Consumer expectations have changed substantially in recent years, and this trend will continue. Companies are preparing for this. It is also possible for a company to distinguish itself and build a reputation as a progressive enterprise.”

In the coming years, Kamp-Roelands hopes to conduct further research on the information that is relevant to drive change to a more sustainable society, the link between the financial and non-financial aspects of business operations, as well as the manner in which the two aspects can reinforce each other. “What is the most relevant place to apply measures within the value chain, so that all energy can be directed towards the most effective initiatives? I would most like to investigate the impact of information on decision-making in multidisciplinary teams, preferably with researchers from other faculties like psychologists or behavioural scientists. In this regard, I feel like a kid in a candy store here in this broad university in Groningen.”