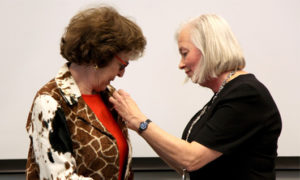 In a touching ceremony that saw her family, network and colleagues convened at the headquarters of the Global Reporting Initiative (GRI) in Amsterdam, Teresa Fogelberg, Deputy Chief Executive at GRI was decorated as Officer in the Order of Orange-Nassau of the Netherlands for her global leadership in sustainability and the advancement of the position of women. Ms. Marriët Mittendorff, Mayor of Heumen, the municipality where Ms. Fogelberg resides, presented the distinction on behalf of the King of the Netherlands.

Ms. Fogelberg received this high royal decoration in recognition for her global leadership and contribution to sustainability and sustainable development, human rights, women’s rights, influencing policies and regulation, and building bridges between the public and private sectors.

This decoration took place at the threshold of Ms. Fogelberg saying goodbye to GRI after fifteen years of co-leadership. An anthropologist by training, Ms. Fogelberg’s long and impressive career has focused on promoting sustainability and the wellbeing of people all around the world. After an initial period as an academic at Leiden university, her work took her to the Sahel Region of West Africa, where she worked for the ILO, the US State Department and the Netherlands Ministry of Foreign Affairs on gender issues and on setting up FEWS, the Famine Early-Warning System. She then went on to work at the highest levels of the Netherlands Ministry of Foreign Affairs, including as Head of the newly created Department for Women and Development and the Research, Education and Culture Department. After a short period as President of the OECD Sahel and West Africa Club, the Club du Sahel, she became Director of Climate Change, and led the Dutch delegations to the UNFCCC global climate negotiations.

Former GRI Chairman Herman Mulder: “This distinction is a recognition of Teresa’s tireless work to promote sustainability and human rights around the world, not only at GRI but at every organization she has been part of. It is also a recognition of her ability to build bridges and consensus for this important work”.

Ms. Fogelberg brought GRI to the Netherlands in 2002, when she was in charge of developing public-private partnerships, working for Minister Jan Pronk and Kofi Annan, the Secretary General at the World Summit for Sustainable Development in Johannesburg; she joined GRI herself in on the first of January 2004. She strengthened the goals of the organization through her extensive work with stakeholders, particularly institutional investors, foundations and governments. Her drive has greatly contributed to the growth and leadership of the organization.

She has also contributed on a voluntary basis to many cause-based organizations such as LOVA (co-founder of Netherlands association of gender studies in anthropology), WWF, Cordaid, the OECD, the Dutch National Transparency Benchmark, QuestionMark, VBDO – the Dutch National Association of Investors for Sustainable Development-, ILEIA – sustainable smallholder agriculture in developing countries, the CGIAR -the International Consultative Group on Agricultural Research -, ICARDA – international center for agricultural research in the MENA region- and ICIMOD – the International Center for Integrated Mountain Development in the Hindu Kush.

Her strong vision for the role of government in supporting and enhancing the sustainability and transparency of companies has contributed to a worldwide movement that has paved the way to more transparency and sustainable development with the contribution of a myriad of actors, including the private sector, civil society organizations, labor, academia, and other stakeholders. Her ability to convene and help apparently conflicting visions converge has been paramount to these developments.

Sir Mark Moody Stuart, former vice chair of GRI and former CEO of Shell: “As an early Board member of GRI I have known Teresa since 2004. Teresa has a deep commitment to the very many facets of social justice and sustainability. She is a determined but quietly spoken diplomat who will not take no for an answer, but will work painstakingly to build and maintain bridges, systematically identifying and then working to remove roadblocks in the way of progress. She does this with a smile and in a very quiet way, but her drive to the solution is extremely powerful and effective.”

Above all, Teresa Fogelberg is a connector, and one who has always fought against indifference to the plights of others, as well as a knowledgeable and powerful force for change. As Tim Mohin, Chief Executive Officer of GRI expressed “Teresa is a real visionary whose direction has created concrete and tangible opportunities for individuals, the private sector, and regulators to contribute to building a better world and more just society. Her deep expertise and commitment to human rights, gender, and sustainable development issues is remarkable.”

After the ceremony, Ms. Fogelberg expressed her gratitude and continued: “I see this decoration as a recognition of the great organization and global movement that GRI is, that has led to transparency and accountability as the new global norm, and of the thousands of women and men that give so much for social justice and a sustainable future.”

Congratulations to Ms. Fogelberg for this distinction.
Read the historical article ‘Behind the first 15 years of GRI sustainability reporting‘