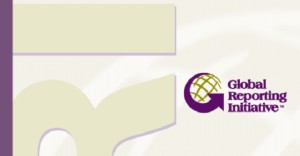 This blog originally appeared here in Dutch on Pulse on LinkedIn, by Folkert van der Molen, and has been translated to English by Alison Azaria.

Last month marks exactly 15 years since the Global Reporting Initiative’s (GRI) release of the first version of its sustainability reporting guidelines, “The June 2000 Guidelines”. Let’s take a look back at some of the developments of the reporting guidelines and also see what the future holds for GRI.

The GRI was established in the autumn of 1997 by the Coalition for Environmentally Responsible Economies (CERES) in collaboration with the Tellus Institute (a nonprofit research and advisory). The United Nations Environment Programme (UNEP) joined shortly thereafter as an important partner. In early 1998 a steering committee was formed to guide the policy and overall direction of the GRI.

The creators of the GRI had great dreams to form an open stakeholder process that will eventually become a broad-based guideline for reporting on People-Planet-Profit. On the one hand, this would serve as a good stepping stone for companies forming their reports. On the other hand, this would enable stakeholders to form a bigger picture and assessment of the sustainability performance of companies that would aid in the companies’ decision making process.

Prior to the publication of the 1st edition of the GRI guidelines, which piloted 21 companies with the draft guidelines published in March 1999. Former engineering consultancy DHV (now Royal HaskoningDHV) took the initiative to complete the Dutch translation of the first edition of the guidelines. On December 7th, 1999, DHV began hosting an annual seminar on CSR reporting, urging and showing companies what it means to disclose and report. The first ever seminar was a success, with over 100 participants attended.

Moreover, it is not to be forgotten that there were some notable Dutch names in the household who have played active roles from the outset when it comes to GRI: Nancy Kamp-Roelands, Johan Piet and Piet Sprengers.

In 2001, GRI expressed its intention institutionalize the organization and to settle preferably with headquarters in Europe. During that time, DHV took the initiative and approached the then CEO (Allen White), welcomed him to the Netherlands and consequently setting up meetings together with Allen and various Dutch government ministries and municipalities. In April 2002, the decision was made by the GRI to settle in Amsterdam (see news headlines Het Financieele Dagblad), over several other European cities. The then Secretary of State for Economic Affairs, Gerrit Ybema, strongly supported the agreement and began allocating funds for the transition.

In late 2002, GRI had settled on Keizersgracht in the Netherlands, just alongside the Amsterdam canal. The CEO then was also a Dutchman: Ernst Ligteringen. In 2006, the first major international GRI conference was organized in Amsterdam, attendees would include Al Gore and HRH Willem Alexander. The 5th annual Congress will be taking place in on May 20th 2016 in Amsterdam, just as all of the four previous of the annual Congresses.

Dutch companies since then have really took it to heart and explored deep into the GRI guidelines. Most companies which produced a sustainability report based its reporting to the greater or lesser extent to these guidelines. Later, GRI released version 2 of its guidelines (2002), version G3 (2006) and version G4 (2013) and thereafter. Improving further its guidelines on the basis of the dialogues with the various stakeholders, drawing from practical experiences from previous versions.

The GRI has also had great influence on national and international policy and law in the area of ​​reporting (partly due to the support from the Dutch government). Teresa Fogelberg, GRI Deputy Chief Executive, can be seen as having a background from working in the Netherlands Ministry Foreign Affairs. There are now 30 countries with reference to the GRI in their policies.

In recent years, comprehensive reporting (both financial and CSR) are having an uptake, in line with the direction of and are serving as a basis to the IIRC guidelines.

GRI has achieved clear results. Reporting on sustainability has become commonplace, both in the Netherlands and internationally. The use of GRI in the Netherlands is almost an obvious one. The transparency of the CSR performance of companies has improved dramatically. Although critics still view reporting as bureaucracy and a box-ticking exercise. Yet the impact is evident and it is undisputed. ‘Knowledge is power’ and provides for improvement for further sustainability. If you need to report on strategies and policies and essentially, what is really material (materiality assessment), there is still a process to be developed. From the investment world, a whole industry has sprung up to provide sustainability reports based on inputs for the sustainable investment process.

Early June this year, GRI has unfolded a new strategy for the future. GRI has thereby extended the scope and categorically unveiled and propelled itself to the next era of sustainability reporting. GRI expressed that in the next five years, it will focus on strengthening its decision-making in the direction of a more sustainable economy and the world. After all, this was one of the initial driving forces (see above) for GRI, and without a doubt, it will continue to be improved.

I believe GRI is moving the right direction in terms of securing the future in reporting, with this new strategy, alongside with the matching new logo. In my opinion, through this strategy, GRI will be able to maintain its leading position in the field of standardization of sustainability reporting. I am proud to have contributed to the success of GRI and the promotion of their use in the Netherlands and worldwide.

Folkert van der Molen is nowadays marketing manager of CSR Consultancy Sustainalize and owner of www.Sustainability-Reports.Com (since 1997) and www.duurzaamheidsverslag.nl